The Atlanta Ripper is perhaps one of America’s most brutal and prolific serial killers, but also one of its most forgotten, and there is even some controversy over whether he existed at all. Starting around 1909, a series of murders of black and mixed-race women in Atlanta, Georgia suggested that a mysterious murderer was prowling the streets, slashing women’s throats and sending the entire community into a panic. On this episode, Tom and Jenny discuss this tragically unsolved case, delving into the murders themselves as well as the controversies surrounding the killings at the time. America, it seems, had its very own Jack the Ripper, and whoever he was, he’s the subject of our 40th episode. 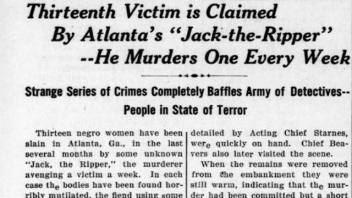